Working at the Greenbranch Market as I do, people expect me to know stuff about the food we grow and sell. And I do know stuff! Some stuff. Most of the time. But there are some questions that I am unprepared to answer, especially when it comes to the livestock. So I corner Farmer Ted when he comes in from the field  and pester him until my knowledge is sufficiently expanded. Here, then, are the answers to some Frequently Asked Questions, and some not-so-frequently asked questions about our chicken: 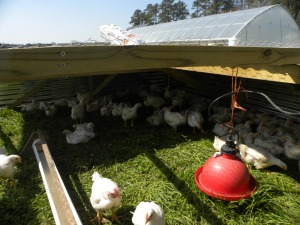 These are our "meat birds." See the green grass? The space they have to move around? The fresh air, sun, shade, and crayons? (for expressing themselves, get it?)

That’s PASTURED chicken. (No, we don’t sell heat-sterilized birds.) That means we raise chickens for meat, aka “broilers,” that have been “on pasture,” aka a grassy field, as opposed to being cooped up in huge industrial chicken houses (known in the industry as a CAFO) and stuffed with all manner of feed to the point where they can barely move. Our meat birds are kept outside in movable enclosures that allow them to forage and peck around for insects and eat grass and generally express their chicken-ness. (Which on at least one occasion for at least one little chicken seemed to involve staring up into the rain until it drowned, I kid you not. If you were destined for someone’s dinner table in a few short weeks, you might stare open mouthed up into the rain, too, though.) They also get chicken feed from a bag. That’s natural chicken feed, no hormones or antibiotics, thank you very much. They get a new piece of pasture upon which to do this every day until they reach the ripe age of about 9 weeks, give or take. Then, they express tasty deliciousness.

That's "Pasture John," getting ready to go move those meat birds to new pasture. A job he does most mornings around 7am.

2. “Aha! So you DO feed your chickens grain! That’s bad for them, right?

Great. I see you’ve been doing your homework and learned that there are some nasty things happening in the world of animal feeding and keeping. Chief among this nastiness is feeding grain to cattle. Notice that word is cattle, not chickens. You see, bovines, being cud-chewing animals with several stomachs, are perfectly designed to eat grass and turn that grass into all manner of nutrients. While they are capable of gaining weight by eating grain (and apparently a lot of other  “by-products” that have been approved for cattle feed, including stale chewing gum in its wrapper), it’s not good for them. More on that in another answer… However, CHICKENS are not ruminants (cud-chewers). They are designed to peck at stuff on the ground, and that stuff includes seeds, bugs, grass, grains, whatever they can find. They don’t have any issues, physically or psychologically, with eating grain, and do quite well with it, as a supplement to high-quality pasture.

As far as “free range” meat birds go, Greenbranch farm is what is known in the industry as an “integrated diversified organic farm.” In a nutshell, that means we rotate a wide variety of fruits, vegetables, and animals on blocks of land to improve soil fertility, ward off diseases, and improve productivity, all in the name of good food, stewardship, and sustainability. A dedicated “free range broiler farm” is a whole ‘nother thing, and not very common.  As far as our birds, we do like Joel Salatin, the guru of “letting a chicken express its chickenness,” does. They are in movable pens that are open to the ground at the bottom. They follow our pastured cows, eating up the cow’s offerings along with the tasty mix of grasses, and doing some fertilizing of their own to make more perfect pasture. It’s a healthy and relatively compassionate and efficient system that allows the birds mobility, fresh air, and to peck on pasture. And just so you know, studies indicate that broiler birds, whether completely free range or in pens on pasture, likely do about the same thing. That is, they’re not prone to moving about much and really seem to just stick close to their feed trays.

Well, Greenbranch is a certified organic farm and our produce is organic. Our chickens are not fed any antibiotics or hormones, as their feed is all natural. However, there is no local source of organic chicken feed, so we’re making do with what is available for the time being.

4. Does it really taste any different than the stuff in the supermarket? 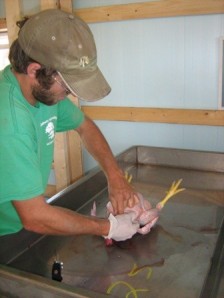 Yes. You can see the yellow fat. That’s omega 3 fat, the good kind. Less likely to clog your arteries kind of fat. There is hardly a day that goes by that someone doesn’t come into the store, having tried one of our chickens, and comments, “That was the best-tasting chicken I ever had. I just had to get another one.” Old-time country folk come in early in the week to get a fresh chicken, reminiscing about their mother’s way of catching and preparing the chicken in their youth. Local restaurants order them by the dozens so that their customers will associate their restaurant with the “best chicken I ever ate.” Said one mom last week, “I tell my kids they don’t even know what a chicken tastes like. Now, they’re going to learn.”

5. “Can I come watch while you kill chickens?” (you’d be surprised how often I get asked this question, too!)

Um, sure. Greenbranch prides itself in being pretty transparent, always happy to have people learn more about what we do. Just stay out of the way. And no, you can’t hold the knife. And if the image below disturbs you, then don’t come out back of the store on a Monday morning.

Amendment, July 18th, from Bob Sayre, scientist friend of my Dad from way back in our Northern California days:

I recently had lunch with my “Chicken Picker” buddies which is a semi-annual event for a few surviving retirees from the old Poultry Lab at Western Regional Research Center.  Every so often some chicken muscle would be required for a research project.  The staff would all gather in the abattoir in the basement where we had a procession line and pick chickens among other things.  One friend’s daughter, in show and tell at school, when asked what her father did at work said “My Daddy kills chickens”.

I was amused about the pastured chickens vs. pasteurized.  It seems there may be a problem with “Truth in Labeling”.  Also the yellow color in the skin and fat comes from carotene in the green grass and not from omega-3 fatty acids. [oops, my bad!] Foster Farms used yellow skin as a marketing point by feeding diets high in carotene form extract of marigold blooms.  The controversy over the flavor of free range chickens vs. pen raised chickens is one of long standing.  Several taste studies were done at the Lab. years ago and no significant differences were found between the two groups.

This entry was posted in Uncategorized. Bookmark the permalink.